It is my favorite time of year… Mission Creek Festival time! I am excited to be part the fantastic lineup this year. I hear passes are already sold out, but individual tickets are still available. See you in Iowa City!

Posted on October 7, 2013 by AlexisStevens 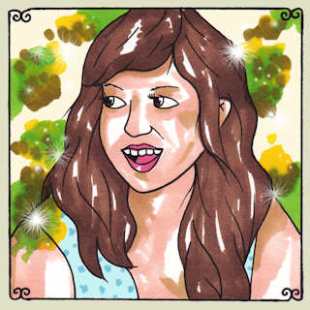 I see a resemblance.

My Daytrotter session is up!

A big thanks to the kind folks at Daytrotter.com for having me, and thanks to my trusty bandmates, Randy and Ryan, for playing so purdy.

“Back Around” at Seldom Seen

I’m finally getting around to posting this video, taken by Jason Smith, of me and Randy playing at the Seldom Seen Festival in beautiful Monmouth, IA, at the end of June. A lovely time was had by all.

My friend Brian and I went in to record Daytrotter sessions on the same day, and Randy, Ryan, and I ended up sitting in on his songs. Give it a listen here.

You can also go to his website at BriJo.co to see his upcoming tour dates.

I think the Daytrotter recording turned out great! Mine should be out soon, I hope…

Here are a few of the fun shows and events in the next couple of months:

06.29.2013 — Brian Johannesen (who’s also recording at Daytrotter) and I will be playing at Seldom Seen festival in Monmouth, IA. The festival will feature music, art, poetry, camping, bonfires, and friendship.

07.30.2013 — My dear friends the Lonelyhearts will be coming through Nashville on their tour in support of their new album, Years in the Great Interior. They, Brian Johannesen, and I will be playing a show at the Basement, starting at 7pm. This will be my first official Nashville show, and I couldn’t be happier about playing it with those guys. Onward!